The Irish Chamber Orchestra is Ireland’s most dynamic ensemble. Mixing traditional repertoire with
new commissions and collaborating with everyone from DJs to dance companies, the ICO pushes the
boundaries of what a chamber orchestra can do. These days, you are as likely to find us at the
Electric Picnic as Mozartfest, but wherever we perform, the ICO delivers world-class concerts feted
for their energy and style.
Each year, Ireland’s busiest chamber ensemble presents concert seasons in Limerick and Dublin,
embarks on two national tours, and makes a series of prestigious international appearances
supported by Culture Ireland. Our Artistic Committee works closely with our Artistic Partners to
devise exciting, diverse, and innovative programmes, mixing standard repertoire with new work –
often specially commissioned – from the best young Irish composers. This versatile approach
enables us to appeal to music fans of every stripe while upholding the highest artistic standards.
The driving force behind ICO’s last decade of success has been its Principal Conductor/Artistic
Partner Jörg Widmann, a composer, conductor, and clarinettist whose irrepressible energy and
pursuit of excellence has enabled the ICO to expand its horizons, attracting outstanding international
performers such as Thomas Zehetmair, Henning Kraggerud, Florian Donderer, Brett Dean, Sheku
Kanneh-Mason Tabea Zimmermann, Igor Levit, and Elisabeth Leonskaja. Throughout the past
decade, the ICO has performed at leading concert halls and festivals across Europe, the U.S.A., and
South America. The ICO released a series of acclaimed recordings on the prestigious Orfeo and
Alpha Classics labels. The ICO was the first Irish Orchestra to complete a three-year residency
at Heidelberger Frühling and is currently orchestra-in-residence at Kilkenny Arts Festival.
In May 2022, celebrated Austrian Violinist Thomas Zehetmair was appointed Principal
Conductor/Artistic Partner on a three-year tenure. Zehetmair’s enthusiasm and commitment is
matched by the orchestra itself, led by the ebullient Katherine Hunka, and comprises of 22
outstanding musicians. The ICO’s special rapport, forged by over 20 years of playing – and
sometimes singing! – together, creates the unique sound that has captivated audiences all over the
world.
The orchestra enjoys outstanding support. The enthusiasm and forward thinking of CEO Gerard
Keenan has been instrumental in realising some of the ICO’s most exhilarating collaborations, while
the board, chaired by Aibhlín McCrann, comprises members whose diverse professional expertise is
matched by their determination to realise the orchestra’s vision.
At the heart of this vision is the belief that music is for everyone. That is why the ICO has
implemented an ambitious and far-reaching strategy that aims to take music out of the concert hall
and into the local community, inspiring children to try music for themselves, and supporting them on
their journey from first lesson to public performance.
Our ground-breaking initiative, Sing Out with Strings (SOWS), offers primary school children in
Limerick the chance to learn free music. Now in its eleventh year, the project has been hailed as a
model of social inclusion, offering opportunities for young people, developing key life skills, and
providing tangible long-term benefits for participants, their families, and the wider community.

Choral Scholars is an internationally-acclaimed chamber choir of gifted student singers led by founding Artistic Director, Dr Desmond Earley, based at University College Dublin College of Arts & Humanities, and a member of the suite of ensembles fostered by UCD School of Music.
The choir frequently performs with Ireland’s leading instrumentalists and orchestras and has in recent years collaborated with the Irish Chamber Orchestra, the RTÉ Concert Orchestra, and the European Union Chamber Orchestra. In touring the Netherlands, Hungary, Italy, Belgium, Luxembourg, the United Kingdom, and the United States of America, the group has brought University College Dublin and its music to an international audience.
The choir regularly broadcasts on television and radio. Notable recent appearances include Centenary (RTÉ), for which the ensemble provided the choral soundtrack, and concerts with Hans Zimmer and Ennio Morricone. In March 2019, they marked their 20th Anniversary with a debut concert at New York’s Carnegie Hall.
The performance and commissioning of works by living composers is a hallmark of this ensemble. New compositions have been written for the group by Elaine Agnew, Ivo Antognini, Mark Armstrong, Seán Doherty, Eoghan Desmond, Desmond Earley, Eriks Esenvalds, Damien Geter, Andrej Makor, Colin Mawby, Michael McGlynn, Natasa Paulberg, Laura Sheils, Timothy Stephens, Dale Trumbore, Bill Whelan and Kevin Whyms.
Be All Merry (2020) is their third album on Signum Classics following the hit release Invisible Stars (2015) and Perpetual Twilight (2019), and is a collection of traditional and contemporary Advent and Christmas music from Ireland and Scotland, including new arrangements and compositions by some of Ireland’s most celebrated composers.

Hailed by The Irish Times as ‘enterprising and wide-ranging’, Desmond Earley, Artistic Director of the Choral Scholars of University College Dublin, has established a reputation as one of Ireland’s foremost choral directors and early-keyboard specialists.
Desmond is a lecturer in Performance Studies at University College Dublin (UCD) and serves as rotating Artistic Director of the UCD Ad Astra Academy. In 2017-2018 he was Visiting Scholar at Lewis & Clark College, Oregon (USA) and Guest Conductor/Scholar at Bowdoin College, Maine (USA).
As a concert instrumentalist and director, Desmond works with many of the world’s finest orchestras including the Portland Baroque Orchestra, Irish Chamber Orchestra, Irish Baroque Orchestra, RTÉ Concert Orchestra, European Union Chamber Orchestra and English Chamber Orchestra. Desmond has also collaborated with some of the world’s great musicians including Sir James Galway, Roy Goodman, Christopher Hogwood, Monica Huggett, and Konrad Junghaenel.
As a celebrated composer and arranger, Desmond has published works with Music Sales (UK), Hal Leonard Corporation (USA), Alliance Music (USA) and with Seolta Music (IRL) where he serves as editor of the international ‘College Choral Series’.
His acclaimed work Body of the Moon (2017) based on a setting of texts by Galileo Galilei, was commissioned by All Classical Portland Radio (USA) for the total solar eclipse across the United States of America. He has created special arrangements for renowned ensembles including the RTÉ Concert Orchestra, the Portland Symphony Orchestra (Maine, USA), Tenebrae (UK), and the Irish Baroque Orchestra.

Tristan Russcher BA (Oxon) FRCO A.Mus.A is one of the leading organists on the island of Ireland. Born in Australia, he completed his A- Levels at Ampleforth College, York and was then awarded an unconditional offer to study music as an Organ Scholar at Worcester College, Oxford. He graduated with honours in 2003 and was immediately awarded the joint organ scholarship between Christ Church and St Patrick's cathedrals, Dublin. He was appointed Assistant Director of Music at Christ Church Cathedral in 2007 and Director of the Cathedral Girls’ Choir the following year. Also in 2008 Tristan co-presented with David Leigh the complete organ works of Olivier Messiaen in a week-long recital series. During his time at Christ Church he recorded two albums for the Signum record label- A Remembrance and I Love all Beauteous Things, celebrating the music of Francis Pott and Herbert Howells, respectively. In 2012 he became only the seventh person to perform Francis Pott's epic two-hour organ symphony Christus, considered by many to be the 'Everest' of the organ repertoire, and gave the Northern Ireland premiere on the Mulholland organ in the Ulster Hall in 2013.

In 2011 Tristan was appointed Director of Music at Saint Bartholomew’s Church, Clyde Road, Dublin. The choirs of boys, girls and adults sang at the weekly liturgies and regularly participated in national and international tours, concerts and broadcasts. Tristan performed the organ solos in Poulenc’s Concerto pour Orgue, Cordes et Timbales in 2013, Widor’s Sinfonia Sacra with the RTE Concert Orchestra in 2017 and Leighton’s Concerto for Organ and String Orchestra in 2020, all as parts of the Pipeworks Organ and Choral Festival.  He is in regular demand as soloist, chamber musician, accompanist and répétiteur throughout the island of Ireland. Tristan moved to Belfast in September 2021 and has recently been appointed Associate Organist of Belfast Cathedral.

The Ways of Zion do Mourn, Part I of Israel in Egypt HWV 54 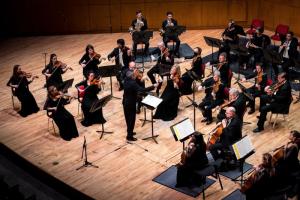 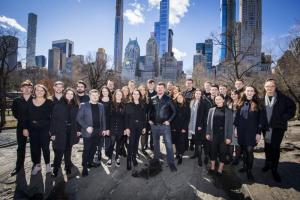 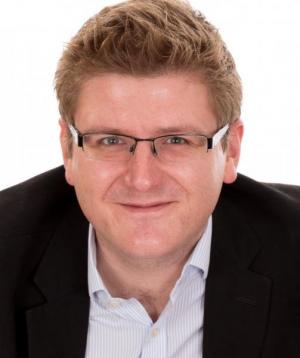