Matthew Breen is a recent graduate of the Royal Irish Academy of Music, where he studied
organ with David Adams, attaining First-Class Honours.
During this time he was a regular prize-winner at competitions including Feis Ceoil
and the Northern Ireland International Organ Competition.
Matthew is much in demand as a solo recitalist, having given performances in
cathedrals, churches and concert halls throughout the UK and Ireland.
As a harpsichordist and continuo player, he appears frequently in opera productions and
at chamber music festivals, and has performed with the Ulster Orchestra.
One of Matthew’s particular focuses is on improvised music. He has studied organ
improvisation with Ansgar Wallenhorst, and has participated in masterclasses with David
Briggs. His piano trio ‘Five To Two’ has been hailed as a rejuvenating force in Irish jazz,
appearing regularly at major music festivals across the country.
From 2016-2021 Matthew was Organist and Director of Music at St Patrick’s Church,
Dalkey, Co. Dublin. He continues to work in church music, currently as Senior Organ Scholar
at Liverpool Cathedral, studying with Ian Tracey. 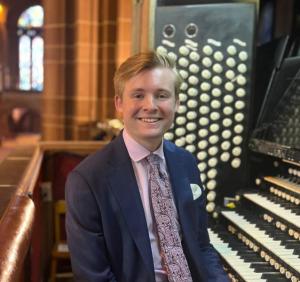