Commended for “masterful artistry” (The Diapason, USA) and “astounding virtuosity and musicality” (Choir and Organ), David Baskeyfield has earned a reputation for creative programing, showcasing virtuoso facility tempered by intelligent interpretation, authoritative command of registration and informed by intuitive and communicative musicality.
Baskeyfield specializes particularly in the music of the French composers of the 19th and 20th centuries. However, his concert repertoire is wide and eclectic, at home with the music of the Old Masters of the 17th-century as with that of the great 19th-century virtuosos. “Baskeyfield knows how to tell a story with the organ, and there seems to be no literature he cannot interpret convincingly.” (The American Organist).

His two recorded albums to date, both showcasing instruments of particular significance, have been received with high praise: on his debut recording (ATMA Classique): “The perfect combination of organ and organist” (American Record Guide); “Confidence, communication and dash” (Choir and Organ). His latest,“Dupré: the American Experience” (Acis) was recorded on the landmark Franco-American organ of St. Mary the Virgin, Times Square, NY, an ideal vehicle for the music of a Frenchman strongly influenced by the instruments he encountered during his multiple American tours. It includes the premiere recording of Baskeyfield’s edition of an unpublished orchestral transcription by Dupré: “A real tour de force of musical sense” (The American Organist).

Baskeyfield was an organ scholar at St John’s College, Oxford, where he read Law. He moved to America to begin graduate work at the Eastman School of Music as a student of David Higgs, studying improvisation with William Porter. His doctoral research examined the influence of improvisation as taught at the Paris Conservatoire on the composed repertoire of Dupré and Vierne. He is the recipient of an unusual number of first prizes in playing competitions; these include St Albans, Montreal, Miami, and the AGO improvisation competition, all with audience prize.

Aside from solo performance he enjoys work as a collaborative pianist and organist, continuo player and occasional cocktail pianist. He has occasionally given theatre organ recitals. He is currently enthusiastic about cooking, brewing, and sports fishing. He shares his house with two springer spaniels, Lucy and Wilbur. 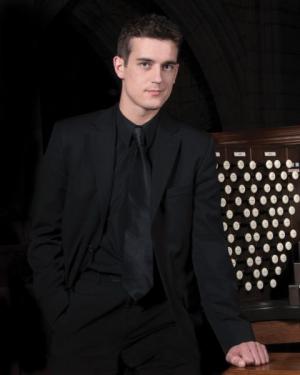