David Adams studied organ and harpsichord in Dublin, Freiburg and Amsterdam, winning prizes at international competitions in Speyer, Lüneburg, Bruges and Dublin. Since his début recital at St. Paul’s Cathedral, London, at the age of 16, he has performed throughout Ireland, the UK and Europe, and is a regular guest at major international festivals.

He is much in demand as an ensemble player in the fields of Early and contemporary music and has premiered many new works, including works by Gerald Barry, John Buckley, Raymond Deane, Donnacha Dennehy, Gráinne Mulvey, Jonathan Nangle, Kevin O’Connell, Kevin Volans, Jennifer Walsh, Sebastian Adams and numerous compositions written specially for him. In addition to solo CDs recorded on the organs of Trinity College Dublin and the National Concert Hall in Dublin, he has recorded for Naxos, Black Box and Wergo. Recently he recorded CDs of eighteenth-century Irish music (with Bill Dowdall) and works by Benjamin Dwyer (with Maya Homburger and Barry Guy).

David has taught at conservatories in Freiburg, Berlin and The Hague, and now lectures in organ and harpsichord at the Royal Irish Academy of Music in Dublin, where he is also Head of the Early Music Dept. As part of his work in RIAM he has directed over 20 opera productions since 2007. In 2007, also, he was awarded a PhD from the Vrije Universiteit in Amsterdam for his work on Max Reger and Karl Straube.

In the last five years David has given organ recitals in Ireland, France, Germany, The Netherlands and New York. Since Covid-19 landed David has performed with the Irish Chamber Orchestra and the RTÉ Concert Orchestra, recorded for Kaleidoscope and directed the opera La serva padrona by Pergolesi for RIAM. He also gave the opening recital of the Pipeworks Festival in June 2020 in St. Patrick’s Cathedral, marking its 40th anniversary. 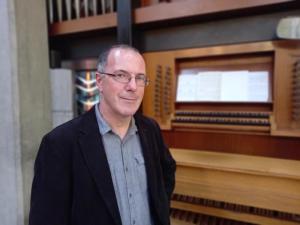